Why Side Projects Matter, Especially in the Creative Industry

I spend most of my waking hours thinking about design and animation. As a motion designer, the nature of my job and the creative industry as a whole means I’m constantly seeing design. Whether I’m researching new tech, catching up on campaigns from big names in motion design, or continuing my own projects, a significant part of my time is spent engaging with creative visual media.

It shows up everywhere. I think about the walking patterns of people I see in the grocery store, how that movement would translate into an animation cycle. I pay close attention to the ads I’m served on Hulu, how long the logos stay on screen, how the type animates in. My world revolves around my work.

For the last ten years, I’ve been—completely intentionally—in the weeds of visual design. I went straight from undergraduate studies to an MFA program, which meant six consecutive years of formal education. Changing employers had the same cadence with mere days between positions. Everyone around me, both in college and early in my career, was intensely focused on climbing their own ladder with a fervor that was frightening, so I did the same. At first, it proved valuable. I could measure my skill development and reaped the benefits at work. My portfolio improved. I had freelance work in addition to stable employment. But after a few years working at such a high pace, I was experiencing burn-out.

The constant need for creative output was draining. There were days when all I wanted to do was backup old files and organize my task board, anything that would prevent me from needing to critically think about color, motion, or typography. I loved my job, but one skill that I was seriously lacking was figuring out how to make space for myself. I never learned how to rest.

I used to avoid after-hours creative work. Being creatively “on” all the time was exhausting. The last thing I wanted to do in the evenings was the same thing I had just spent eight hours doing. The thought of staring at Photoshop for an extra five hours a night was daunting. Almost all of my personal creative motivation dried up.

I also hadn’t found an outlet that felt both fulfilling and worth my limited time. Any projects I started felt like walking through mud. I couldn’t stop seeing my creative hobbies as a waste of time because they weren’t producing anything. I wasn’t making money or growing a following on social media. This thinking, I know now, is flawed. It assumes that our worth comes only from productivity.

The reality is that creative work can have a profound impact on your mood, productivity, and problem-solving, as well as interpersonal relationships with others. It’s a subject that’s been well researched and documented. In one study, employees with a creative hobby were rated, both by themselves and their coworkers, as helpful, collaborative, and creative. The same report found that those with hobbies felt more relaxed.

Personal creative work makes us better storytellers. I find this particularly useful for advertising. We’re tasked with thinking like the consumer, building content strategies that connect with their needs and wants. Creative work is all about the person on the other end. If you’re writing, you’re thinking about your reader. If you’re cooking, you’re considering your diner, and so on. Creativity forces you to simplify. As the Harvard Business Review asks, “what will I create that will evoke the emotion I’m going for?”

In the spring of 2019, I found my way back to an outlet I abandoned in college. I started writing poems for the first time in almost eight years. They were terrible, but I could sit and write a dozen a week. I wasn’t showing them to anybody, so they didn’t need to be potential Pulitzers. They were a quick way to communicate, to explain something broad that I had been mulling over. After a few months, I collected two dozen of them and put them in three hand-stitched books. I don’t plan to make any more.

From there, I discovered short forms of writing prose, formats that allowed for experimentation in 1,000 words or less. I took classes online during the onset of the pandemic and slowly started submitting to publications. It worked. By the end of 2020, I had a handful of publications at litmags including MoonPark Review and Stone of Madness Press, a regular writing practice, and suddenly found myself editing a full-length book.

It isn’t always easy. Sometimes I go weeks without touching my manuscript because I am stumped on a story or completely lacking the time or energy to focus. Life has other requirements. Animals need feeding, houses need cleaning. Even then, I find that more of my time outside of work is spent thinking about my own projects. That shift has had a significant impact on my nine-to-five.

I am better at my job now than I ever have been. My personal creative avenues inform my professional ones. Getting rejected by dozens of magazines improved my attitude toward feedback on client work. It was easy to lose the sting of critique when I was able to separate myself from the work. When writing, I consider the reader and how they’ll interpret a particular story, which changed how I thought about the animations I worked on. I wasn’t just animating anymore. I was more thoughtful about how I’d feel if I saw the ad out in the wild. Did the colors make sense? Was the brand clear and memorable? Could I understand the message? Perhaps the most impactful change was one that I couldn’t see. I was happier. I was excited about my work. I was focused again, and found it easier to problem solve on-the-fly.

I don’t consider my personal creative work exceptional or unusual. I’ve had people tell me they envy my work ethic, that they admire the dedication to craft. People often tell me they feel like they lack something intrinsically that could allow them to pursue some extracurricular creativity. I hate hearing people say, “I’m not creative,” because everybody is. It just takes different forms. Writer and journalist Matt Richter agrees. “Not all creativity looks the same, and it doesn’t take the same name.”

The work doesn’t happen overnight. It is a slow process that grows over time. Creative projects are beautiful because they don’t need to be rushed. As Makers & Mavericks points out, “you are letting it grow up protected from the harsh world of putting food on the table and meeting deadlines and targets.” If I’ve convinced you to start your own creative practice outside of your day job, I have some advice.

So get to it. Buy a sketchbook and some ballpoint pens. Get that cheap guitar—or the slightly nicer one—you’ve been thinking about. Write a story, or three, or twelve. I can’t wait to see what you make. 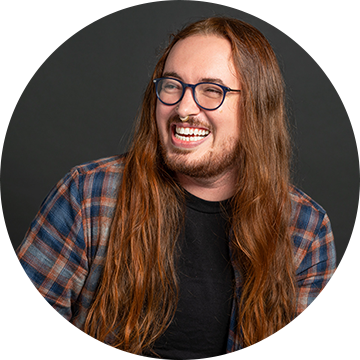 When they aren’t animating or designing, they spend much of their time reading and writing, learning to play new instruments, and editing an online literary magazine. They will talk to you at length about food history and class, rural identities in art, and queer representation in media.

Do More Than Disrupt the Feed